Forensic science is constantly evolving, and there are new techniques and instruments used every day alongside tools that have been used by investigators for centuries. While some tools (like gas chromatographs) are often shown on TV or cited as a key way to get evidence, other more established equipment, like balances, are sometimes overlooked by writers and journalists. In this post, we'll take a look at balances and their applications in forensic sciences. Forensics metrology is not limited to balances and scales, of course, but they're what we'll focus on.

There are many different types of balances, some suited for basic weighing, and others being highly accurate instruments designed to measure small quantities and tiny samples. The forensic sciences encompass a very wide variety of discipline, from biology to chemistry, physics, computer sciences, accounting and a myriad of others. They're used to investigate a wide variety of crimes, such as motor vehicle incidents to homicide, sexual assaults or burglaries. While DNA and autopsies are frequently referred to, cases have been closed with an array of evidence - from identifying plants and leaves from a specific area to cloth fibers or distinct tire prints from vehicles. Sometimes scientists have to measure trace amounts of evidence, while other times they must measure tons of seized materials.

Analytical Balances have a dedicated workspace in forensics labs, where they can be used in optimal conditions and will not be moved. Acute precision is paramount; in some cases, there is very little substance that can be measured, and the weight results can determine if the substance can be tested without losing all of it. These are some examples of their applications.

Many scientists use balances to measure the components of reagents that will react to bodily fluids, combustibles, fuel, accelerants and other substances that would otherwise be difficult to detect with the naked eye after a clean-up or deterioration of the crime scene.

Sometimes, density measurement is used to verify the composition of a material or to ascertain whether two samples (such as pieces of glass) come from the same source.

Drugs, narcotics and the materials used to create them are frequently weighed; if you watch or read the news, the police often describe the drugs found using the weight. The quantity/weight of some substances found may also correspond to the charges that will be pursued.

Sometimes, law enforcement needs to weigh heavy objects that will not fit on traditional balances, such as human bodies or important quantities of drugs, chemicals or explosives. They need scales that can withsatnd chemicals, can be cleaned quickly and easily to avoid contamination, and that are easy to use so that non trained personnel can figure out how to use the scale with little to no training. Something IP66 rated is preferable.

Bags and packages are can also be weighed for cases involving smuggling, for example.

The Importance of GLP/ISO Compliance

Evidence can make or break a case, and it is paramount for the lab processing it to ensure and be able to prove that said evidence was not contaminated or tampered with. Forensic evidence can impact many lives, and as such, laboratories that handle the evidence are subjected to strict standards they must comply with. Court cases can be won or lost based on evidence, and improperly handled evidence can be deemed inadmissible in court.

Many lab balances have USB and RS-232 interfaces that allow communication with printers and computers. Sending the data directly to software, or saving it, helps to keep track of which balance was used, to weigh what, when, by whom, and whether certain procedures were followed. 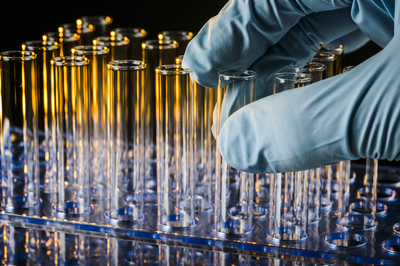 Forensic labs may require balances to be compliant with GLP and ISO norms, and having a balance automatically fill relevant fields can help scientists focus on their work rather than having to stop to do data entry.

Like all sciences, forensics spans many different disciplines and is a constantly evolving field. These aren't the only balances and applications used by law enforcement, merely the most common. Tell us if you know of any specific forensics applications in which balances are used by commenting below. Please feel free to contact us if you have specific questions on balances that can be used in forensics labs. You can follow us on social media for more blog posts, product news and announcements.