What is the Towing Force Transducer (TFT)?

You may have seen emails, social media posts or press releases about our recent exposition at the Forensics Europe Expo 2017, on May 3-4. One of our products in the spotlight was the towing force transducer, or TFT. What is the TFT? What does it do? How is it used in the field of forensics? We explore an unconventional product in this blog post.

What is the TFT?

The TFT towing force transducer is a specialised system used after an accident to determine vehicle speed prior to the crash. It was originally developed in conjunction with the Thames Valley Police RTA unit. The TFT helps investigators to determine the sequence of events preceding a crash, and is especially useful when no witnesses are available. Securely contained in a durable aluminium-clad carry case, the TFT includes a built-in printer to produce measurement documentation as evidence or for further analysis. An indicator displays the force results within 1kg, and the indicator and case are connected to a sealed, IP65-rated load cell.

How does the TFT work and how can it be used to understand how a car accident happened?

These are the following variables that must be collected or calculated to determine the circumstances that lead to the crash of the vehicle: 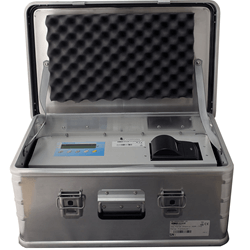 The velocity of a vehicle can be deduced from scratch and skid marks using the coefficient of friction between the vehicle and the road. Accident investigators frequently conduct skid or drag test with damaged vehicles at the scene of an accident. The TFT facilitates this process; it is carried inside a towing vehicle with its load cell connected to the vehicle being dragged. The force required to tow the vehicle is shown on the digital display to within 1kg. The values are automatically recorded at 1-2 second intervals and are used to calculate the coefficient of friction.

Friction is the resisting force exerted by a surface when an object moves across it (or tries to). Aside from friction, frequently used variables are mass, distance, speed, force and acceleration. There are many factors that can complicate the investigation of road accidents, and the physics can get quite complex depending on the circumstances.

To considerably simplify things, when you pull (or in this case, tow) an object of Mass M that takes a force F to move, the formula F=k*M allows you to calculate k, the coefficient of the friction caused by the object of mass M being moved by force F on the surface. If you know M, you can measure F and therefore calculate k. Of course, the physic for car collisions is much more complex than that.

How does calculating friction help?

Friction directly affects the physic of car accidents. There are tables that can help investigators know from the coefficient of friction the approximate speed of the vehicle, the surface of the road, the conditions of the road (like dry or wet), if the driver was braking or not (acceleration and deceleration), the direction and much more. Of course, the process isn’t easy or automatic. The physics of car accidents are very complex. While the TFT doesn’t do the investigator’s jobs for them, it simplifies the obtention of key variables that are necessary to understand what happened and how it happened.